That is where i stayed from Monday afternoon until Wednesday night. These have been moving days! I met my exgf, visited some sights i knew and some i did not and decided for a job. In detail, i have had the job interview including some tests on tuesday morning with a company i have had contact for some weeks now. The appointment went really well, thus I got a first positive feedback and since the executive couldn't be in Berlin, they would discuss it by phone and call me eventually. So I went to Tiergarten, primarily to make some photos for the "Demokratische Sozialisation des kreativen Lasters" (something like "democratic socializiation of the creatvie transporter"). It is an art project in Heidenheim, Germany, where a styled transporter is parked for some time on suggested and voted places. Since everyone can suggest any place (vote for Starlight Express, Bochum!!!!) a location in Berlin is favoured by most voters, though the number one place in front of Reichstag seems to be impossible to do. Therefore i made some pictures of the permanent representation of Baden-Württemberg (anyhow Uwe didn't seem to upload an image or two yet). 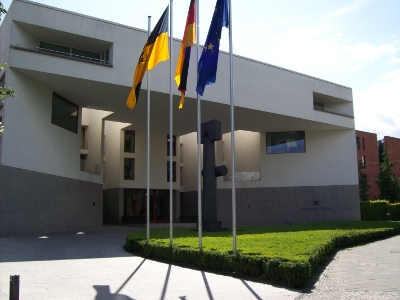 More photos on flickr
In the meantime i was called by the company i had the job interview with. The executive was impressed by their reports as well as the test results and so i was offered a contract immediately. Of course, i was happy about this news, but said i will talk to some close friends first of all and consider it. After taking the photos i headed towards the Ramones Museum. It has tourned out as a very cool place with lots of memorabilia of a really really outragous band. If you ever visit Berlin and favour punk rock music you absolutely need to go to the Ramones Museum. 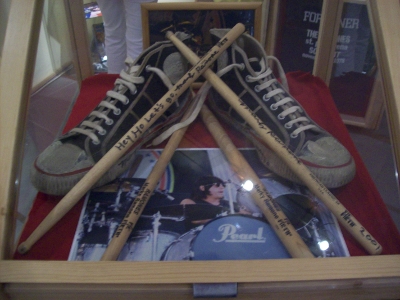 More photos on flickr
In the evening and after getting something to eat at Studio 54 (right at Tacheles) i went to the famous space station c-base for some beer and wifi. People and place are still amazing, not only when release parties and stuff take place :D On Wednesday, after getting some good breakfast and before checking out the backpackers hostel (nice people there, too, recommandable) I phoned the company and submitted my decision. And because i want to generate some tension, that's all you get in this paragraph :) So for this weekday i headed towards the TV Tower, having a longer newspaper break on some cool park with an amazing name i cannot remember, in order to get a cup of coffee at Starbucks. Why Starbucks? Because it is the place were the alternative Berlin tour starts. Marc led us to a lot of amazing places and shared some background knowledge with us. Though i had to leave the tour just in the middle of it, it was tremendous and insightful. If you happen to be there, i recommend you to join the tour and get a up to date impression of Berlin and it's subcultures. I will attend the tour another time for sure again and complete. If you're wondering why I had to leave the tour (which, btw, takes up to four or five hours) i got another call by that company. One and a half hour later i was at the office and signed the contract! Thus, I will start working at construktiv on october, 1st, and now can plan my move to this brisk city. To complete the day a had lunch (well dinner) at Aufsturz, a comfortable bar with loads of beer brands (over 100), i tried three of them. As it seems, it need to visit it some more times. Hence I am absolutely looking forward to a new challenge and phase in my life. I only desperatley wish Franzi was by my side :( P.S.: I have an identi.ca account for several weeks now, but never got to tell you. Of course, you're invited to follow me.
Tags:
Blizzz